Although I have 100 built boards from the manufacturer, I am only getting about a 40% yield out of the box. It took me over a day to figure out what was going wrong.

It turns out that about half the 1.5V low noise voltage regulators from the assembler are failing. These provide power for the tuner chip (two separate ones to reduce noise). To make matters worse, their failure mode is to throw the USB 5V directly onto the tuner chip, which itself promptly fails short circuit to ground.

So I spent quite some time figuring out what was going wrong. At first I thought it was shorts under the QFNs due to the secondary failure mode. Then after replacing the tuner chip, measuring no short, applying power, ***PING***, blown up another tuner chip, something else was wrong. Turns out to be about half of these regulators.

The marking on the regulators looks fine. Specific date/batch codes are not an indication of failure either.

As luck would have it, I can isolate the power to the tuner by removing five chip inductors, test for the failure, replace the offending regulator(s), replace the inductors and away we go. But I have to do this on *every* unit. I’ve now fixed twenty-six, and I estimate this to be another 1.5 days’ work. 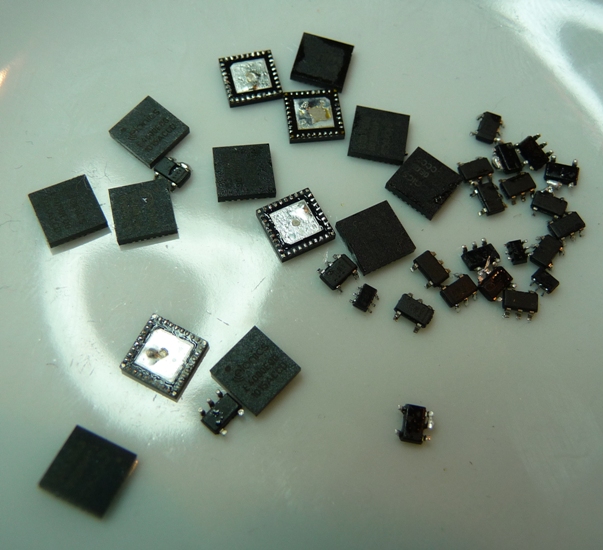