The FUNcube Dongle Pro+: building a PCB with parts on both sides 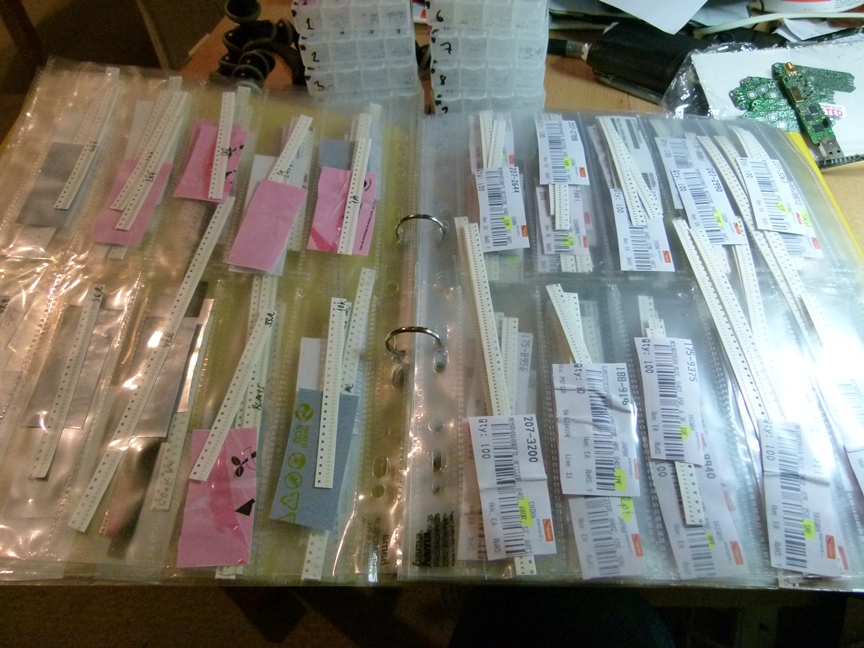 The first spin of the PCB for the FCD Pro+ I soldered manually, one part at a time, one side at a time. I used the hot air iron for the big chips, and manually soldered the discretes. Truth is, I knew no better. On speaking to my wonderful assemblers (Holmes Circuit Designs, Letchworth, http://www.hcduk.co.uk), I asked them how they do it without the parts falling off when you turn the board upside down? Now I knew the odd 0402 and 0603 would be safe, with surface tension taking the strain, but what about the heavier parts?

Well there are two ways. Either design the board with the heavy parts on one side, or use a different solder paste on one side to the other, with differing melting temperatures. Preferably, use the first method! Hence, you will see from the earlier pictures, that the FCD Pro+ has the big parts on one side and the relatively smaller parts of the other. Logistically this sounds easier said than done, but in reality with a multilayer board, I found that the number of through vias required limited what you can get away with anyway.

So, when the second PCB spin arrived this time last week, I was eager to try the old pizza oven technique on a double sided board. Sure enough, probably one of the best boards I’ve ever made, first time, no tombstoning (when the part stands up to attention) and no bridges, on either side. Simply load one side, gas mark 6, cool, load other side, gas mark six, cool. Done, as Gordon Ramsay might say.

So that’s great, but turn back the clock an hour or six. What’s the most efficient way of repetitively loading those 250 parts onto a PCB? Answer: use a professional PCB assmebler. Of course, I recommend Holmes Circuit Designs of Letchworth, http://www.hcduk.co.uk, did I mention them already? But what if you’re prototyping, or maybe only doing three or four?

I use a simple paper technique. I print out the parts from the PCB layout, and highlight the positions with a highlighter pen. I do five parts per page. In addition, I keep the parts in order in a folder using old 35mm photo negative storage holders. When you do this, ALWAYS write on the rear of the SMD strips the part’s value. I’ll say that again. ALWAYS write down the value of the SMD part on the back of the strip. That way, when you put the part back in all the excitement, you’ll have some way of knowing when you come back to it that the right part was in the right place. 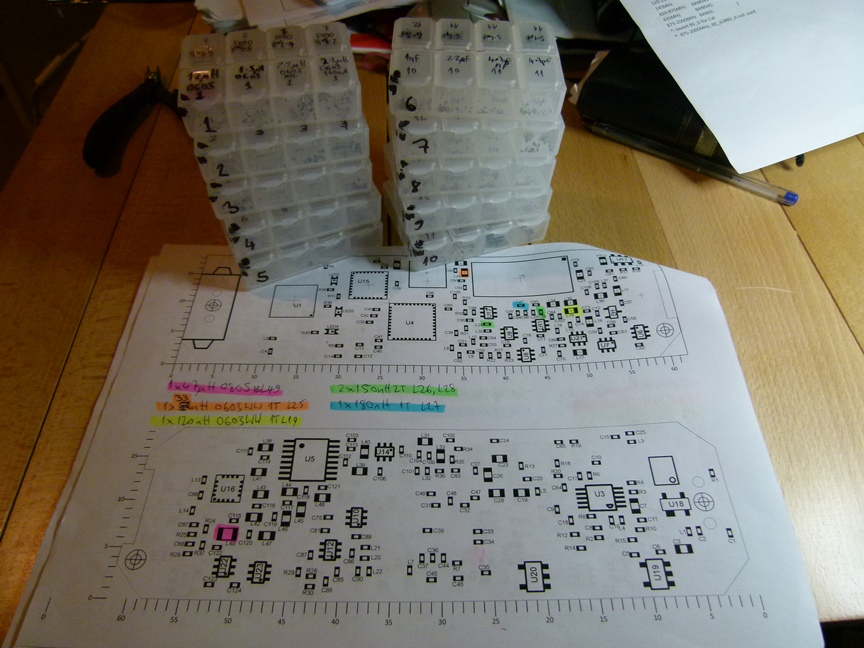 Get your highlighter pens out

If you’re doing more than a couple of boards, accessing the SMD strips one at a time can be a bit time consuming. For quicker access for building multiple PCBs in one shot, I use marked pill box style dispensers for the non-static sensitive devices. Maplin in the UK have a great box for this, http://www.maplin.co.uk/component-storage-box-26133 which has individual _sealed_ lids. Do NOT us component boxes with a single lid for multiple compartments: however hard you try, your 0201 and 0402 parts will cross-mogenate into a chaotic mess that you’ll never fix without having to trash the lot and start again.

When loading up your PCB, if you have a need for, say, a dozen 100nF caps to be loaded onto the pasted PCB, simply empty out enough (+300%) of the 100nF compartment onto a piece of white paper*. Then load up the PCB as per your highlighted notes I mentioned earlier. Then, with the remaining parts on the paper, funnel the remainder back into the compartment.

By the way, always be prepared to lose a few parts: that’s life. Even the best PCB assemblers, such as Holmes Circuit Designs from Letchworth, http://www.hcduk.co.uk, ask for a few extras when their crazy robot machine has had a few too many espressos in the morning. I know exactly how it feels.

* In line with our ecological aims, the same piece of paper may be used dozens of times for this purpose. Patent not applied for.

One Response to The FUNcube Dongle Pro+: building a PCB with parts on both sides